In mid-February 2021, winter storm Uri wreaked havoc on Texas, trapping much of the huge state in a week-long deep freeze. The ice storm knocked out electricity for millions of homes on some of the coldest days and nights in the last hundred years for that region. It was truly the storm of the century for much of Texas — and experts warn it may lead to a spike in addiction problems.

The helplessness and hopelessness many experienced over the week-long storm has continued to linger in their memories.

CNN reported that 111 people died across the state as a result of the storm – most from hypothermia; but car accidents, carbon monoxide poisoning, fire, and medical equipment failure also claimed lives. According to CBS News, “The storm froze gas fields and wind turbines in West Texas, shut down coal plants and idled oil refineries. Fuel and power shortages also caused some factories and food-processing plants to close.” A particularly horrific pile-up accident on a Fort Worth interstate highway involved 130 vehicles and killed six people. The wreck was captured on video — and replayed over and over by local and national media outlets.

The winter storm also did over half a billion in damage to Texas agriculture, decimating citrus and vegetable crops and livestock, according to Texas A&M University. In sum, it’s estimated to be the costliest natural disaster in the Lone Star State’s history.

Coming as it did in the middle of the COVID-19 crisis, the storm gifted Texans with lingering power and water outages, followed by boil-water notices, followed by repairs – which all together left many people feeling totally overwhelmed.

Texas’ power outages have passed, everything has thawed out, and repairs have been made, but some psychological aftershocks still linger for many Texans. The helplessness and hopelessness many experienced over the week-long storm has continued to hover like a dark cloud in their memories.

The Substance Abuse and Mental Health Services Administration (SAMHSA) “warns that people traumatized by major disasters can be at particular risk for a substance abuse disorder,” according to ABC News. “Although everyone reacts differently to disasters, some of those affected may suffer from serious mental or emotional distress,” which in turn may lead to triggering or worsening substance abuse issues.

Whether the cause is a natural disaster or something more personal, there are some common responses to traumatic experiences. These include initial shock, which gives way to numbness and denial. Anxiety, guilt, and depression can follow. Symptoms of physical illness – headaches, stomach problems, blood pressure issues – can also result. This process, left unchecked, can easily set one up for struggles with alcohol or drugs.

Things are mostly back to normal in Texas … but the trauma it left in its wake won’t just fade away.

ABC News cites a study done in the years immediately before and after Hurricane Katrina that found “the rate of hospitalizations for substance abuse increased by approximately 30 percent.”

So, why do people turn to drugs and alcohol in the aftermath of traumatic events? One of the after-effects of a natural disaster is that people affected by it feel a loss of control – both over the situation around them and, potentially, their own response to it, explains a study published in the Journal of Psychoactive Drugs.

The researchers in the study examined how disasters have the potential to expose victims to a terrifying loss of control. This in turn leads to emotional dysregulation and, ultimately, the need to re-regulate those emotions. Some rely on substances to do that when circumstances overwhelm our ability to regulate them ourselves. That dysregulation, dealt with the wrong way for too long, can set us up for addiction.

Dealing with Trauma After a Natural Disaster 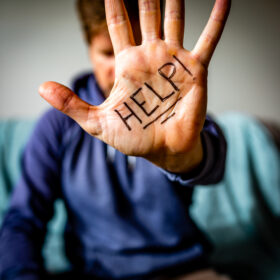 If you find yourself traumatized after a natural disaster or other event, be patient with yourself — but aware of your thoughts and emotions, especially if they skew toward extreme negativity or fear. Connect with loved ones for support and find healthy ways to process what you’re feeling. You can meditate, journal, exercise, or see a counselor for this purpose. One more step to consider, especially for survivors of natural disasters: Turn off the TV. Seeing nonstop video of a disaster isn’t doing anyone any favors. If you find that you’ve turned to the frequent use of drugs or alcohol to help medicate psychological distress or alter your mood, it may be time to reach out to treatment professionals.

Things are mostly back to normal in Texas, and by the time the summer’s smothering heat has gripped the state, the ice storm will drift into a distant-seeming memory. But the trauma left in its wake won’t fade as easily. Taking the necessary steps to examine and address traumatic experiences now can help defend against long-lasting consequences in the form of addiction struggles down the road.