Skip to content
Think of substance addiction as a pebble flung into a puddle—its effects ripple outward to everything within its range. People with addiction believe they’re not hurting anyone but themselves, which isn’t true. So, when it comes to confronting someone about their own drug and alcohol issues, that conversation can quickly become radioactive. This fallout as a result of their addiction, especially on those who love them, is devastating—and sometimes permanent unless handled properly.

One thing needs to be clear—people with substance addiction have no control over what they’re doing, taking or using. They become dependent on whatever they’re taking to help cope. Addiction and the lack of control that goes with it damages friendships, disrupts families and impacts the workplace. Those of us who have not experienced addiction often wonder what caused their loved one to become that way in the first place? There’s no one reason why someone becomes addicted. There are many variables that can be present, such as Mental Illness: When people with addiction are admitted to treatment programs, they are usually found to also have what’s called a co-occurring disorder, or mental illness alongside their substance use disorder. This could be anything from depression to anxiety to bipolar disorder. The Substance Abuse and Mental Health Services Administration (SAMHSA) reports that approximately 29 percent of those diagnosed as mentally ill are also addicted to alcohol or drugs. Environment: These influences come from both your adult and adolescent backgrounds. What your family and friends do directly influence what you do, whether you’re aware of it or not. Places, where substance use takes place frequently and is accepted, can promote addictive behaviors. Neglect and abuse can also be common in households that see a lot of addictive behaviors. Genes: Heredity also factors into addiction. Despite being proven that substance addiction is a disease—much like diabetes and heart disease—it’s still thought of in many circles as a weakness of will. However, about half of a person’s vulnerability to addictive behaviors can be traced to genetic factors. So, addiction isn’t something organic that appears from out of nowhere but rather a progressive disease that develops in a person over a period before a life event triggers it.

A Relationship Built on Quicksand

When substance addiction appears in relationships, the elements that once made things click begin to deteriorate. Those battling addiction begin focusing on getting the drugs to maintain their habit—and their high—at whatever the cost. They will raid bank accounts, college tuition funds, even tap their IRA and 401k’s to satisfy the cravings. Secrecy and deception also creep into the mix. This secrecy may increase to the point where your loved one will begin isolating and distancing themselves from their significant others. These relationships, once built on trust, mutual respect and love become filled with doubt, mistrust, and lies—they become, in essence, relationships built on quicksand.

Co-habiting with people consumed by addiction will test the emotions of those around them—increasing their frustration and anger levels, which cause them either to act out towards the one with the addiction, which leads to further isolation, or cause the one with the addiction to act out towards them. To maintain some sort of relationship, loved ones will sometimes transform themselves into enablers, who will: Sometimes this can morph into codependency. Codependents engage in relationships that are one-sided. While they’re bothered by the actions of their addicted spouse or offspring, they have this compulsion to still care for them. The codependent needs the addict as much as the addict needs them. They will often cover for the addict or resolve their issues instead of allowing them to face the consequences of their actions. The codependent will also embrace this image of the ‘victim’ feeling the need to ‘sacrifice’ themselves for their addicted partner—while simultaneously fulfilling their own needs for attachment, no matter how dysfunctional. Remember, addiction can train those with the disease to be masters of manipulation as the disease further inflicts on them.

Supporting Your Loved One in Recovery 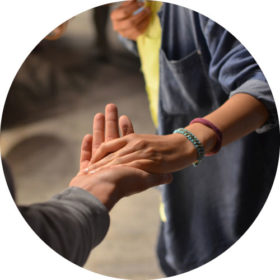 That first step in recovery can be rough, with cravings constantly teasing those in recovery with thoughts of how good it felt when indulging in their habits. Healthy relationships can make the difference between a positive life spent in recovery, or one spent in relapse and uncertainty: Yes, those in recovery might deserve a lot of the blame for their previous behavior, but remind ourselves only keeps us angry, hurt and powerless. Just know that they are probably steeped in shame already because of their behavior when addicted, so be careful not to contribute to those feelings. Remember, for those in recovery it’s two steps forward, one step back. Never look at that backward step as a failure because recovery is a long-path that celebrates success one step at a time, day by day. Since 2015, well over 30,000 American parents have had to bury a child due to drug overdoses. Everyone suffering from addiction was once a child—it can happen to anyone at any age from any social background. Drugs waste your brain, hijack your soul and, if left untreated, can last a lifetime. Sunspire Health has been bringing hope and recovery to those who walk through our doors—so that another parent does not have to lose a piece of their heart to addiction. If you or a loved one is suffering, call us now.
Latest Posts
Categories
Archives
CALL: 833-757-5697