Skip to content
By Clint Fletcher Recovery and labyrinths may seem like an odd pairing at first glance, but these stone pathways are popping up at more treatment centers as a new generation discovers the benefits. Having been around for centuries, these ancient and symbolic winding paths have transcended many different cultures and religions. Labyrinths are still important today, found on holy grounds, in parks, and across recovery campuses around the world — including here at The Meadows Texas! Wherever healing is happening, labyrinths can aid in the process.

A History of Labyrinths

Labyrinths have been around for more than 4,000 years, disappearing and reappearing throughout time. They began as ever-changing symbols before morphing into actual walking paths. Throughout the years, they’ve taken many different forms:

According to the book Labyrinth: Landscape of the Soul, author Di Williams explains that the first evidence can be traced back to roughly 2,000 BC in southern Europe and north Africa. The first ancient labyrinth pattern began to appear in the form of paintings, rock carvings, inscriptions on ceramics, and coins. The same classical design then emerged across Asia and the Americas in similar forms. They also appeared as wall paintings, woven baskets, wooden sculptures, and in sand games.

During this period, the classical design transformed into a more complicated Roman pattern. This new form often appeared as mosaic pavement labyrinths on the floors of villas, bathhouses, and tombs, though they were too small for walking. Some Roman mosaic pavements still exist today in British museums. It wasn’t until the Middle Ages that labyrinths were built for walking.

Major advancements in labyrinth-building and design took place during the Middle Ages. The medieval design was created by a monk name Otfrid toward the end of the 9th century. He took the classical design and converted it from a seven-circuit pattern by adding four more. Numerous 12th and 13th century labyrinths designed for walking were later built in churches and cathedrals across Europe based on Otfrid’s design drawn on the last page of his Book of Gospels. Labyrinths today are the result of shifting designs throughout the ages. In addition to churches, parks, and treatment facilities, they can also be found in schools and prisons. The most walked-through labyrinth in the world is the Chartres Labyrinth, still intact after 800 years and found on the floor of Chartres Cathedral in France.

How Are Labyrinths Used?

The truth is, there’s no right or wrong way to walk through a labyrinth. Though the path is guided for you, you can step over and start in the center if you choose. Labyrinths have single paths that wind toward the center, and they’re main purpose is mindfulness meditation or as a prayer tool for spiritual practice and growth. Some believe that starting on the outside and making your way to the center represents the journey to your own center and then back out in the world, but that’s just one way to look at a labyrinth. The ancient symbol overall represents wholeness. While they can be maze-like in nature, labyrinths don’t actually have blind passages, wrong turns, or dead ends. In other words, they aren’t designed to frustrate you. In fact, the exact opposite is true. The entire path can be seen no matter where you’re standing, allowing individuals to focus on themselves internally. You can use the path in the way that works best for you. There is labyrinth etiquette, though. Always be mindful of others using the labyrinth at the same time as you and definitely leave your cell phone behind. 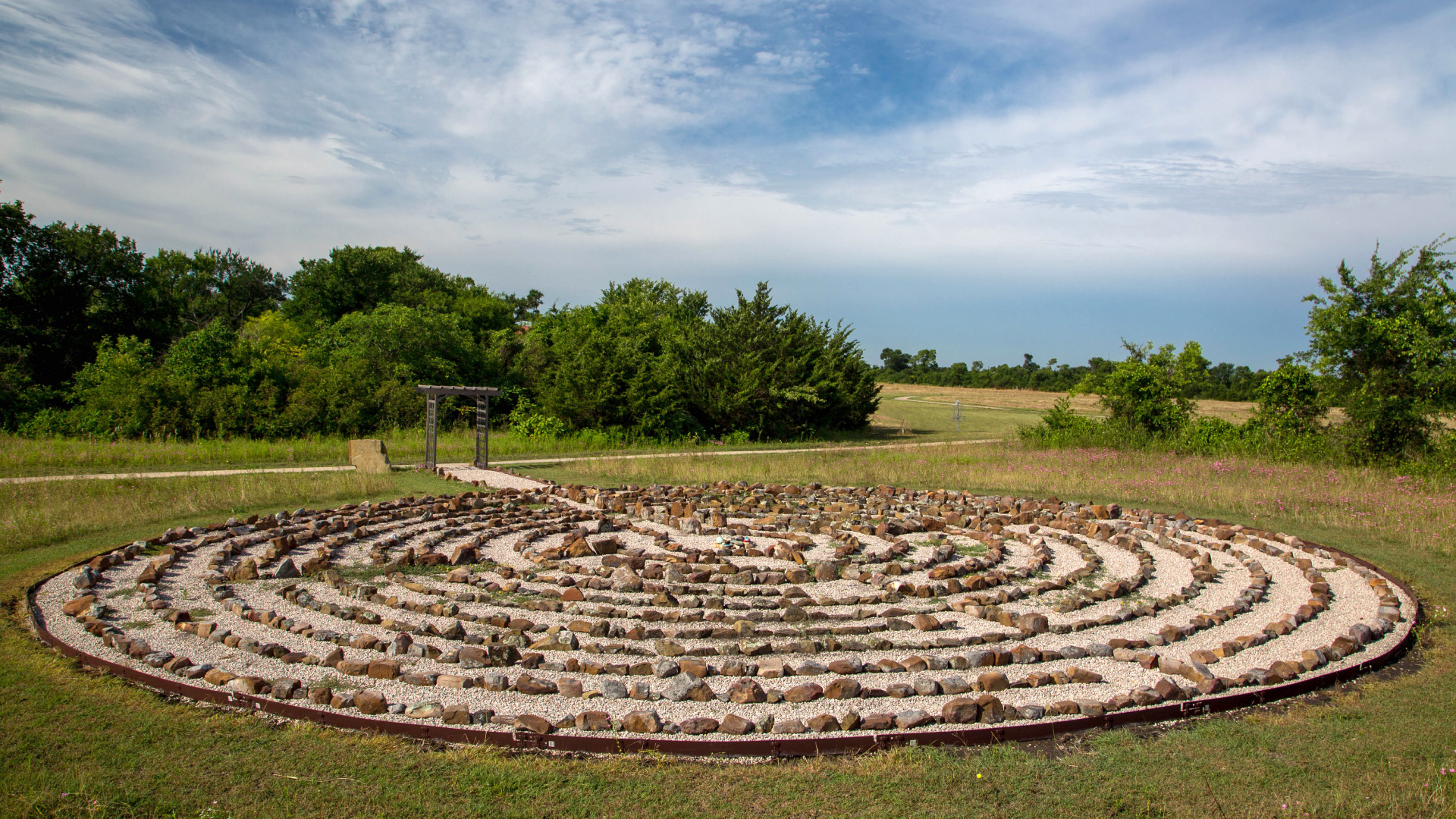 Labyrinth at The Meadows Texas

Labyrinths are an excellent grounding exercise. While the human condition causes us to rewind and fast forward in our minds, creating anxiety about the past and future, labyrinths bring us back to the present. Those who are at the beginning of their recovery may find their minds louder than most. As treatment begins (whether for addiction, trauma or co-occurring mental health issues), you might experience uninvited, unwanted, or even obsessive thoughts. Labyrinths have been proven to have the ability to quiet the mind. In good practice, they help connect the body with the mind and the mind with an inner spirit. Finding that inner spirit helps to boost a healthy life in recovery.

Other benefits from labyrinths include: