This deadly drug from the past continues to see a resurgence as an opioid alternative — despite the risks.

In 2018 alone, 128 people died in the United States every day from an opioid overdose, according to drugabuse.gov, which included heroin.

Heroin had its 15 minutes of fame in the 1990s when it was pervasive in the grunge music scene, blamed for the downfall of Kurt Cobain and countless others, and had a starring role in movies like Trainspotting. It was even tied to a fashion moment. While “heroin chic” may have faded from the runways, heroin addiction made its way back into the mainstream as the opioid epidemic began grabbing headlines.

In 2018 alone, 128 people died in the United States every day from an opioid overdose, according to drugabuse.gov, which included heroin. The overdoses didn’t distinguish between rich and poor, young and old, red states or blue states, suburban dwellers or residents of a small town.

Only a year before, the National Survey on Drug Use and Health revealed that nearly half a million people in the US are current heroin users. A fraction of that group were adolescents, with the majority of users — approximately 390,000 — were 26 and older.

One of the more harrowing discoveries about heroin use is that many times it begins at home — in the medicine cabinet, more specifically. Research has shown that abusing prescription drugs often opens to door to heroin use. According to studies from the Centers for Disease Control, people who start using opiates in pill form are 40 times more likely to struggle with heroin addiction later on.

Prescriptions issued for legitimate pain issues (including meds like OxyContin, hydrocodone, or Vicodin) have effects very similar to heroin. When these medications are abused rather than used as prescribed, they are very addictive, with withdrawal symptoms so severe they keep users coming back for more. And when someone craves that rush more regularly, heroin winds up being far cheaper (and more readily available) once the prescription runs out. The crackdown on overprescribing of legal pain meds also drove users to try heroin.

The Basics of Heroin

Heroin is illegal and, oddly enough, it was developed as a replacement for another dangerous drug: morphine. In the late 1800s it was touted as a cure-all, but the 1914 Harrison Narcotics Act banned heroin along with cocaine, after the addictive properties and damaging side effects became known.

Relatively cheap to produce and deadly in both pure and impure forms, heroin can be injected, smoked, or snorted, while some people mix heroin with crack cocaine, to create something called a speedball. The drug’s effects are felt more rapidly with injection, but that comes with a heightened risk of infection and disease considering that needles may be shared among users. As a result, HIV and hepatitis are additional risks.

Also known as brown sugar, charley, dope, mud, skag, and smack on the street, heroin has a myriad of negative effects on the body including collapsed veins, confusion, dry mouth, heavy limbs, lung complications, and weakened heart valves. Heroin enters the brain rapidly and binds to opioid receptors on cells located in many areas, especially those involved in feeling pain and pleasure, controlling heart rate, sleeping, and breathing.

Hope for Those Battling Heroin Addiction

Addiction to heroin has serious implications for you or someone you love’s well-being and should be addressed immediately. At The Meadows Texas, comprehensive healing for every patient is the goal. According to the Center for Substance Abuse Research (CESAR), heroin withdrawal symptoms are severe, with the worst happening between 48-72 hours after the last use. With everything from muscle and bone pain to restlessness, nausea, diarrhea, and cold flashes, these effects can be dangerous without medical supervision during detox. Of course, detox is only the beginning of the treatment process. A reputable treatment program should address the needs of the whole person — emotionally, physically, and mentally — for the best chance of long-term healing and recovery. 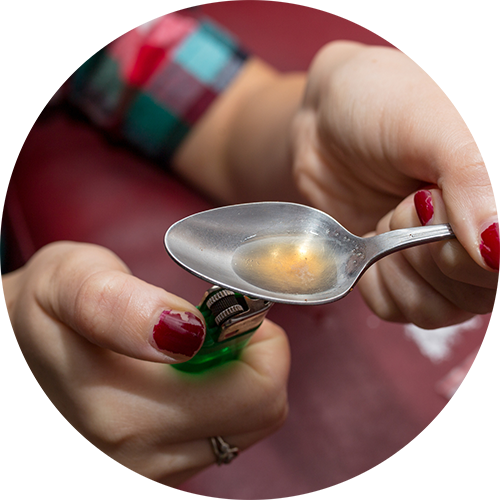 Get answers to your questions